The Sardar Patel National Unity Award, named after the Iron Man of India, will be awarded to recognise notable and inspiring contributions to promote the cause of national unity and integrity and to reinforce the value of a strong and united India. 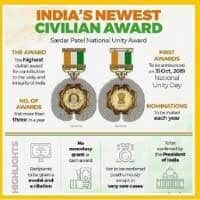 The release said a maximum of three awards would be given in a year and it “would not be conferred posthumously except in very rare and highly deserving cases”.

Any Indian citizen, institution or India-based organization can nominate an individual for the award. Individuals may also nominate themselves for the award.Besides them, state governments and UT administrations and government ministries can send their nominations.

The nominations will be invited every year. The applications would have to be filed online on a specific website designed by the MHA.All citizens will be eligible for the award without any discrimination based on religion, caste, race, gender, birthplace, age or occupation.

The Award would consist of a medal and a citation. No monetary grant or cash award would be attached to this Award. Not more than three Awards would be given in a year. It would not be conferred posthumously except in very rare and highly deserving cases. 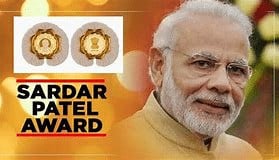 The Nominations would be invited every year. The applications would need to be filed online on the website specifically designed by Ministry of Home Affairs. All citizens, without distinction of religion, race caste, gender, place of birth, age or occupation, and any institution/organization would be eligible for the Award.

Any Indian national or institution or organization based in India would be able to nominate an individual for consideration for this Award. Individuals may also nominate themselves. State Governments, UT Administrations and Ministries of Government of India may also send nominations.

India has produced a legacy of brave hearts since times immemorial. Probably there is not enough space to measure their sacrifices. However, we cannot close our eyes to those people who have made our country proud by excelling in their own fields and bringing us international recognition. Bharat Ratna is the highest civilian honour, given for exceptional service towards advancement of Art, Literature and Science, and in recognition of Public Service of the highest order. It is also not mandatory that Bharat Ratna be awarded every year.

The original specifications for the award called for a circular gold medal, 35 mm in diameter, with the sun and the Hindi legend “Bharat Ratna” above and a floral wreath below. The reverse was to carry the state emblem and motto. It was to be worn around the neck from a white ribbon. This design was altered after a year.The provision of Bharat Ratna was introduced in 1954. The first ever Indian to receive this award was the famous scientist, Chandrasekhara Venkata Raman. Since then, many dignitaries, each a whiz in varied aspects of their career has received this coveted award.

In fact, our former President, Shri A. P. J Abdul Kalam is also a recipient of this esteemed honour (1997). There is no written provision that Bharat Ratna should be awarded to Indian citizens only. The award has been awarded to a naturalized Indian citizen, Agnes Gonxha Bojaxhiu, better known as Mother Teresa (1980) and to two non-Indians Khan Abdul Ghaffar Khan and Nelson Mandela (1990). In 2009, the award was conferred on famous Indian vocalist Pandit Bhimsen Gururaj Joshi.