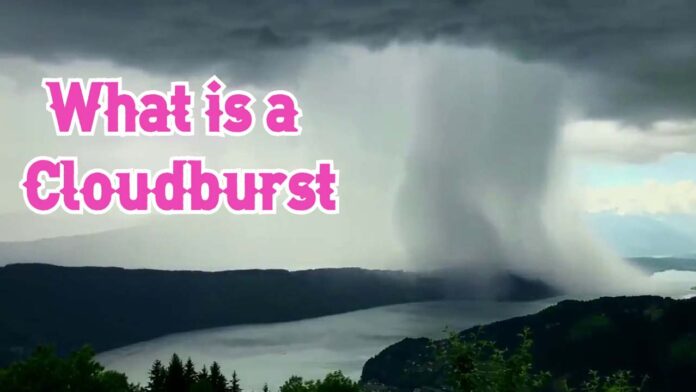 What Is a Cloudburst?

A cloudburst is a localized weather phenomenon characterized by extreme amounts of precipitation over a short period of time within a small geographical area. A cloudburst is sometimes accompanied by hail and thunderstorms which are capable of creating disastrous flood conditions. Meteorologists state that rainfall from cloudbursts is usually showered with a fall rate greater than or equal to 4.9 inches per hour.

Cloudbursts generally occur in mountainous regions, deserts, and interior regions of continental landmasses. They are highly unpredictable by nature and happen very abruptly. Nearly all recorded cloudburst are experienced in the Indian subcontinent where monsoon clouds drift from the Arabian Sea onto the Himalayas.This suggests that setting the benchmark for naming an episode of rainfall as a cloudburst at 100 mm of rainfall in an hour is faulty. The Danish Meteorological Institute, for example, considers cloudburst to be more than 15 mm of precipitation in the course of 30 minutes.

Denmark is also more prepared to deal with cloudburst even though the country suffers one only once every century. The country has a cloudburst management plan as part of the Copenhagen climate adaptation plan. Some of the measures suggested under the plan include steps to separate stormwater from wastewater, and diverting drain water to the sea through roads, canals or urban waterways, and subterranean tunnels. 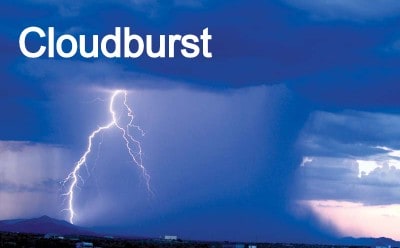 It was estimated in 2012 when the plan was developed that the constructions costs are likely be around 3.8 billion Danish Krones by 2033.For Uttarakhand where even the sewage runs down the mountainside, setting up a system to remove water safely would require much more money and effort.

Characteristics and Effects of Cloudbursts

The catastrophic nature of cloudbursts differs based on terrain. In the mountains, large volumes of water gain momentum as it flows in gushes, destroying structures, trees, animals and people, and as gravity increases in the gullies, it results in landslides and mudslides. most cases, cloudbursts are accompanied by lightning, thunder, strong gusts of wind and hail storms.

In extreme circumstances, flooding associated with cloudbursts can shut down an entire city as people struggle to cope with the influx of water. The most disastrous cloudburst occurred in India in 2013, killing at least 5,400 people and destroying property in 4,200 villages. Other severe cloudbursts have been accompanied with tsunamis in the United States, Pakistan, and Bangladesh.

Historically, cloudbursts are considered rare occurrences. There are no defined techniques to predict their incidence. Nevertheless, a network of radars can be used to detect the likelihood of a cloudburst, but it is very expensive. However, areas that receive heavy rainfall and mountain slopes are prone to cloudbursts, and therefore should be avoided as places for human settlement. Global warming has been attributed to the increase of cloudbursts, especially in the Himalayas, where the effects are first experienced.

how cloudburst different from normal rainfall?

Rains are the blessings to all the living beings on the Earth because it is responsible for depositing most of the fresh water on the Earth and also provides suitable conditions for many types of ecosystems, as well as water for hydroelectric power plants and crop irrigation. Cloudburst is an extreme amount of precipitation in a short period of time to a small geographical area. Here, we are giving detailed explanation on cloudburst, how such cloud formed and what causes the clouds to burst and release all the water at once for general awareness.